Disclaimer: The article requires in-depth knowledge of Game Theory as many terms have implicit meaning only specific to this domain

Honesty is a Sequential form of Game play.

It need not always be a part of Cooperative & Non-Zero-Sum game as players involved may have different implicit motives but acceptable  explicit behavior.

Due to its sequential nature the game play changes its direction & in some case the ultimate goal as well, based on Intent & Information.

Intent has 2 forms: Implicit or Explicit & so does Information: Reveal or Conceal. Information is perceived through behavior & actions of self as well as directed through external entities.

Theoretically game’s global equilibrium is when there exists Perfect Information Symmetry whereby all intents are explicit & all information is revealed.

But in real life context that will lead to a stale state of affairs. The fun is in modulating the dual properties of Intent & Information to have an interesting game play as long as the ultimate goal is mutually agreed upon.

Problem arises when one of the player is playing the game with maximum negotiable explicit intent & revealing enough information to proceed towards the main goal, while the other player has a different intent or is incapable to reveal pertinent information during the game play. When such a game play is prolonged, it results in the state of stupidity & stalemate from both players point of view. It also questions the very game setup for it to be played in the first place. 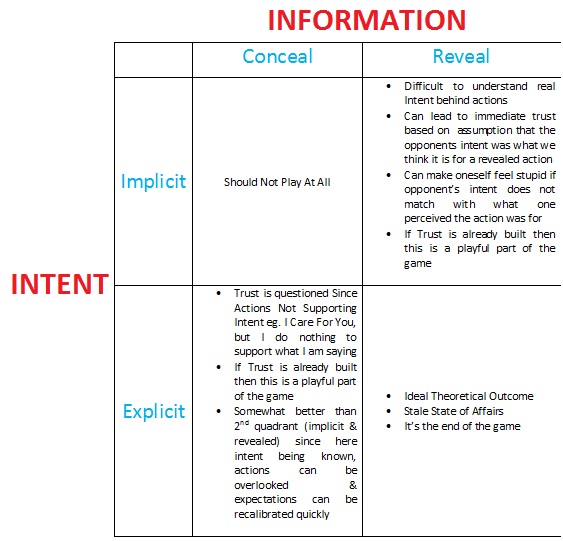 ← All That We Ate
Lifestyle! →